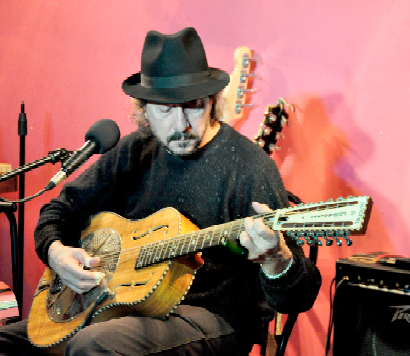 He appeared in Cerdanyola for the first time back in the 90s, in the early years of the Blues festival in Cerdanyola with his band «Algeciras Blues Exprés», he has gone through several formations and he has been running for eleven years a club where most of the Spanish blues bands and others from England, Holland, Germany, France and the United States. In 2003 he decided to record solo and since then he has come to Catalunya several times. Now when time has made him one of the great blues in Spain, comes to Aunt Felipa.

Do not play school blues, Alex transports you back to the origins, in the early 1900s, when New Orleans still did not know that in the blues world, it would become a reference for the rest of humans.

Beneath his hat, with a serious appearance and apparent shyness, he explained the origin of the themes of his repertoire, of men like Robert Johnson known as “The King of the Delta Blues, Bukka White, one of the first great creators of Delta Blues that coincided with Charlie Patton, his main influence. Between half a song from the time of Algeciras Blues Exprés and back to the Mississippi, songs from his latest album, the legend of John Henry, a black worker of gigantic proportions who dies at work after an effort, a version of the duel of banjos of the film Deliverance and a long etc. A very intense and deep repertoire that often left the rock with goose bumps